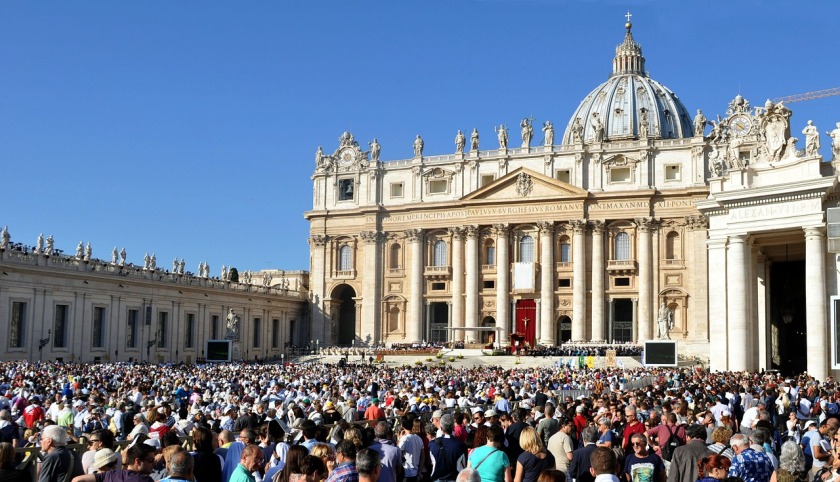 1.) JESUS FOUNDED HIS CHURCH ON PETER AND HE CHOSE HIM AS HEAD OF HIS CHURCH. JESUS GAVE PETER THE KEYS OR AUTHORITIES OF THE KINGDOM OF HEAVEN.
[Matthew 16;18-19] “And I tell you that you are Peter, and on this rock I will build My church, and the gates of Hades will not prevail against it. I will give you the keys of the kingdom of heaven. Whatever you bind on earth will be bound in heaven, and whatever you loose on earth will be loosed in heaven.”
[John 21:15-17]  When they had finished eating, Jesus asked Simon Peter, “Simon son of John, do you love Me more than these?” “Yes, Lord,” he answered, “You know I love You.” Jesus replied, “Feed My lambs. Jesus asked a second time, “Simon son of John, do you love Me?” “Yes, Lord,” he answered, “You know I love You.” Jesus told him, “Shepherd My sheep.” Jesus asked a third time, “Simon son of John, do you love Me?” Peter was deeply hurt that Jesus had asked him a third time, “Do you love Me?” “Lord, You know all things,” he replied. “You know I love You.” Jesus said to him, “Feed My sheep”.
[Luke 22:32] But I have prayed for you, Simon, that your faith will not fail. And when you have turned back, strengthen your brothers
2.) PETER APPOINTED IGNATIUS AS OVERSEER OR BISHOP OF ANTIOCH. IGNATIUS WAS ALSO ONE OF THE DISCIPLES OF JOHN THE BELOVED ALONG WITH HIS FRIEND (POLYCARP)
“. . .  It is said Ignatius converted to Christianity at a young age. Tradition identifies Ignatius, along with his friend Polycarp, as disciples of John the Apostle. Later in his life, Ignatius was chosen to serve as Bishop of Antioch; the fourth-century Church historian Eusebius writes that Ignatius succeeded Evodius. heodoret of Cyrrhus claimed that St. Peter himself left directions that Ignatius be appointed to the episcopal see of Antioch. . . ”  [Saint Ignatius, WIKIPEDIA]
“. . . It is also believed, and with great probability, that, with his friend Polycarp, he was among the auditors of the Apostle St. John. If we include St. Peter, Ignatius was the third Bishop of Antioch and the immediate successor of Evodius (Eusebius, Church History II.3.22). Theodoret (“Dial. Immutab.”, I, iv, 33a, Paris, 1642) is the authority for the statement that St. Peter appointed Ignatius to the See of Antioch. . . ”  [Saint Ignatius, NEW ADVENT]
3.) SAINT IGNATIUS CALLED THE EARLY CHRISTIAN CHURCH AS “CATHOLIC CHURCH”
“. . . The adjective “Catholic” began to be used in reference to the Christian church by Ignatius of Antioch (second century). “Roman” was added to “Catholic” by many Christians as a result of two serious breaches of collegiality among the Christian Churches. The first breach was in the eleventh century between Eastern (Orthodox) Christianity centered in Constantinople and Western Christianity centered in Rome. The second in the sixteenth century among Western Christians – Protestant, mainly Northern Europe, and Catholic, Southern Europe. . . .”  [Roman Catholic Church, NEW WORLD ENCYCLOPEDIA]
“. . . Catholic (from Greek: καθολικός, romanized: katholikos, lit. ‘universal’) was first used to describe the church in the early 2nd century. The first known use of the phrase “the catholic church” (καθολικὴ ἐκκλησία he katholike ekklesia) occurred in the letter written about 110 AD from Saint Ignatius of Antioch to the Smyrnaeans. In the Catechetical Lectures (c. 350) of Saint Cyril of Jerusalem, the name “Catholic Church” was used to distinguish it from other groups that also called themselves “the church. . .”  [Catholic Church, WIKIPEDIA]
4.) THE ROMAN CATHOLIC CHURCH IS THE ORIGINAL OR OLDEST CHRISTIAN CHURCH
“. . .The Roman Catholic Church traces its history to Jesus Christ and the Apostles. Over the course of centuries it developed a highly sophisticated theology and an elaborate organizational structure headed by the papacy, the oldest continuing absolute monarchy in the world. . .”  [Roman Catholicism, BRITANNICA]
“. . . As the oldest branch of Christianity, the history of the Catholic Church plays an integral part of the History of Christianity as a whole. Over time, schisms have disrupted the unity of Christianity. The major divisions occurred in 318 C.E. with Arianism, in 1054 with the East-West Schism with the Eastern Orthodox Church and in 1517 with the Protestant Reformation. . . ”  [Roman Catholic Church, NEW WORLD ENCYCLOPEDIA]
ALSO READ: List Of Popes From St. Peter To St. Francis